Vancouver, BC, September 3, 2021- StraightUp Resources Inc. ("StraightUp" or the “Company”) (CSE: ST) is pleased to announce that Prospectair Geosurveys Inc. has completed a high-resolution heli-borne magnetic survey (MAG) on the RLX North and RLX South (the “Properties”) located in the Red Lake Greenstone Belt 25km east of the Red Lake. The Company has the right and option to acquire 100% undivided interest in the Property, with claims covering over 10,000 hectares (Figure 1). The heli-borne magnetic survey consists of 2,985 line-km at 50m line spacings covering the entire property and preliminary results have been received with the final report expected in early October. 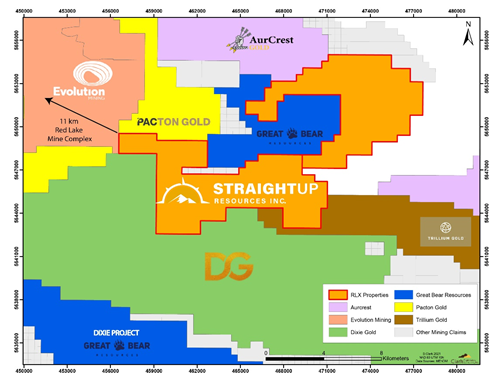 The MAG survey is designed to provide geological and structural details. Interpretation of the results will be used to aid in identifying structural features, lithological contacts and rock types associated with potential gold mineralization and vector exploration efforts to those areas of high merit.

StraightUp’s President and CEO, Mr. Mark Brezer, said, “These projects are in the heart of the Red Lake Mining District, an area that is seeing a resurgence of gold bearing deposits that were overlooked in the past. RLX North and South almost completely surround Great Bear Resources Sobel Project and with our accumulated data from the region and upcoming MAG results, we can better pin-point future drill programs. It is exciting to see how the adoption of technology has led to such advanced interpretation and with computer modelling, revolutionization of the industry”.

Brent Clark, P. Geo, an independent qualified person as defined in National Instrument 43-101, has reviewed, and approved the technical contents of this news release on behalf of the Company.

The RLX North and RLX South are located 25 km southeast of the town of Red Lake. The primary distinction between the two properties is with the interpreted geology underlying each, with the North being primarily of the Balmer Assemblage and the South being Confederation. The contact between these two metavolcanic packages is highly prospective for economic deposits of gold in the Red Lake mining camp. The majority of historic production from the district has been mined from within a few hundred metres of this important geological contact, making it a high priority exploration target. Historic exploration of the RLX claims, which includes diamond drill holes, date back to the 1980’s. Almost $1 million dollars has since been spent on drilling, soil geochemical surveys, line-cutting, IP and geophysical surveying by previous operators.

The Company announces a non-brokered financing to raise up to C$2,000,000 (the “Offering”). Each unit in the Offering consists of one common share issued at a price of $0.20 and one-half of one transferable common share purchase warrant. Each whole warrant (a “Warrant”) entitles the Subscriber to purchase one additional common share of the Issuer (a “Warrant Share”) at a price of C$0.30 per warrant share for a period of two years from the Closing Date. If the common shares trade on the Canadian Securities Exchange (the “CSE”) at a price of $0.50 or greater per common share for a period of 10 consecutive trading days, the Company may accelerate the expiry of the warrants by giving notice to the holders thereof, such that the warrants shall expire on the 31e day after the date of such notice.

Concurrently, the Company also announces the close of the first tranche of the financing for a raise of $301,100 through the issuance of 1,505,500 common shares and 752,750 warrants. The units are subject to a four-month hold expiring on January 3, 2022. $7,000 in finder’s fees and 35,000 finder’s warrants were issued. The finder’s warrants are exercisable at $0.30 for a one-year term, also subject to a four-month hold period.

The net proceeds from the financing are intended to be used for the funding of upcoming exploration projects and property expenditures. The Offering is being made available to accredited investors under applicable securities laws. The Company has entered into a binding commitment letter with the accredited investors with respect to the Offering, where such parties have agreed, subject to certain customary conditions and the execution of a formal subscription agreement, to purchase the Units.

The Company would like to correct a news release dated August 4, 2021. The disclosure around the engagement of Group Arventure to provide and manage digital marketing campaign is incorrectly disclosed and will be handled by North Equities.

StraightUp is engaged in the business of mineral exploration and the acquisition of mineral property assets in Canada. Its objective is to locate and develop economic, precious and base metal properties of merit. StraightUp intends to conduct exploration on the RLX North, RLX South, Belanger and the Ferdinand Gold Property, all located in the Red Lake Mining Division, as well as the recently acquired Bear Head Gold Project, located within the Meen-Dempster Greenstone Belt of the Uchi Subprovince, approximately 80km west of the Pickle Lake Gold Camp.

On Behalf of the Board of Directors
Mark Brezer Chief Executive Officer, President and Director

Neither the CSE nor its Market Regulator (as that term is defined in the policies of the CSE) accepts responsibility for the adequacy or accuracy of this release).